Zaid Hamid said in an interview (private) he gave to students of Shifa College of Medicine Islamabad that he met Yusuf Kazzab in 1992 in Karachi and after that shifted to Rawalpindi, so he is not aware of what corruptions Yusuf Kazzab might have done after 1992.

As usual, Zaid Hamid lied blatantly instead of acknowledging the fact that he was in constant contact with Yusuf Kazzab and acted as his main Sahabi / Khalifa, and that Yusuf Kazzab used to live with Zaid Hamid when he was in Rawalpindi, for extended periods of time, even conducting his ‘majalis’ (gatherings) at Zaid Hamid’s residence.

The following document shows the address of Zaid Hamid given with Yusuf Kazzab’s name (on page 95 of the court verdict of Yusuf Kazzab’s blasphemy case). This is just one of the evidences which proves that Yusuf Kazzab used to stay at his Sahabi-e-Awwal Zaid Hamid’s residence when he visited Rawalpindi, and was VERY close to him. Zaid Hamid has lied to such an extent and changed his stances so much (to defend Yusuf Kazzab in order to save his own hide) that now it is impossible for him to keep on hiding behind his huge pile of lies and fraud. 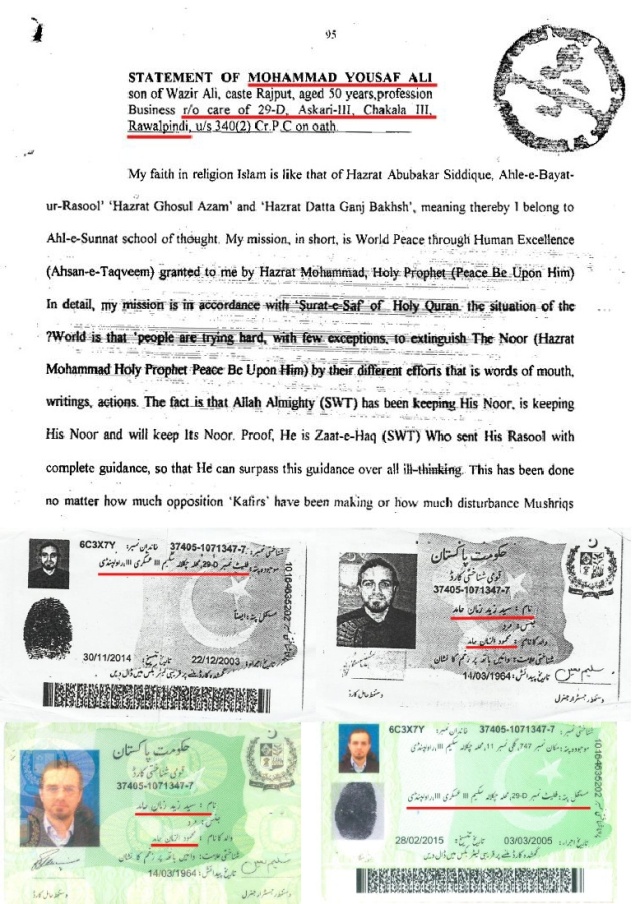 Zaid Hamid said,”Molvis should come to me to clear it” and in zaid hamid’s words “Why they don’t come to meet me? Why they run away? Why they are hiding?”

Zaid Hamid is any “Sharia court” or Sharia authority where ulema should go to “clear their doubts?” Ulema claimed that yusuf is guilty, they dragged him to the court and presented sufficient proofs with all material (Audio,Video, Written Material, eye witnesses) and court gave a sufficient time to yusuf kazzab to present his view, so he was guilty and was sentenced to death, Now ulema and Pakistani People have no doubts on Yusuf Kazzab. So, If zaid hamid have any objection to the court decision then he should go to higher court, If he thinks that courts are Non-Islamic then he should go to Ulema and present them proof of yusuf kazzab “innocence”. This seems to be ludicrous and total non-sense that Ulema should come to zaid hamid.

And everyone knows Ulema are not “hiding” or “running away” on kazzab’s issue instead Zaid Hamid was hiding to accept the truth from last 2 years. And running away from the questions of his dark past.

Note:- (when Molvi Fazzal Ullah and Sufi Muhammad claimed that courts of Pakistan are non-Islamic and they ordered all advocates and Judges to leave Swat immediately then zaid hamid was shouting in his TV shows that these are Takfeeri people and Govt should retain its writ. Now Mr.zaid hamid what are you doing to say courts as Non-Islamic?) If they were wrong then you are right? Or may be you are actual son of those fasadees and takfeeris?( as Zaid Hamid said ulema as the sons of Mulla fazal Ullah)

“A believer is not stung twice from the same hole”. [Bukhari, Muslim]