Last night (July 24, 2013), Mubashir Luqman invited Zaid Hamid and Hafiz Tahir Mahmood Ashrafi to his show. Just like in 2010, motive was to rescue Zaid Hamid once again from the pressure that was being put from different segments of the society regarding his association with false prophet Yusuf Kazzab and his twisted Aqaaid. Mubashir Luqman failed miserably in 2010 and failed again last night.

Zaid Hamid was pleased and relieved that Mubashir Luqman had read the false concocted verdict which Zaid Hamid had given him to read, which yet again proved that Zaid Hamid has been lying and doing all sorts of frauds just to save his mentor and false prophet Yusuf Kazzab.

Here is what Mubashir Luqman read. 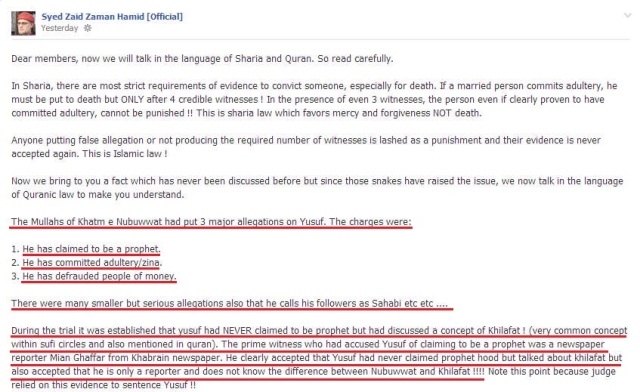 The final pages of the verdict are given below.

Full copy of the verdict is embedded below.

View this document on Scribd

The last two pages (having the ending/closing points of the court verdict from point # 66 to 70) have been posted by Zaid Hamid on his Facebook page (which Mubashir Luqman was showing on the screen but not reading). Even those ending points of the verdict make it very clear that Yusuf Kazzab was sentenced to death for Touheen-e-Risalat (saaw) and Touheen-e-Quran etc, not because of claiming Khilafat, and that the decision was reached by the court after proper analysis of all verbal and documented proofs and witnesses. Zaid Hamid lies openly and distorts these points, saying that Yusuf Kazzab was wrongly given death sentence, only because he claimed Khilafat.